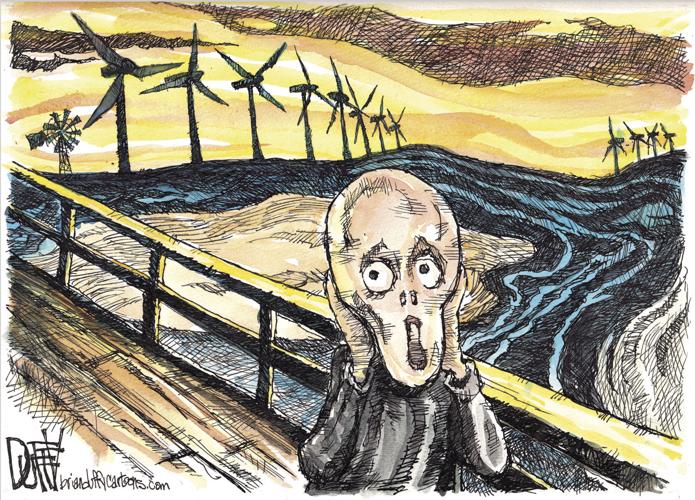 Don’t tell anyone, but the solar and wind grids in the earlier parts of this series are not really ‘zero carbon’, thus the quotes. The processing of silicon, plastics, fibreglass, steel, and concrete are all heavily hydrocarbon dependent.

Although requiring loads of carbon intensive concrete and steel to build, there is another possibility for a ‘zero carbon’ grid, but one must speak the word that will not be spoken.

An installation of 80 GW of nuclear power can produce enough power to constantly supply the current German grid. The installation would cost about $480 billion and with a 92% capacity factor for new nuclear would provide 73.6 GW of electricity at a wholesale cost of $0.038/kWh for each kWh produced. Over a lifespan of 40 years, with the recommended excess capacity of 15% for thermal electricity, the cost would be about $0.049/kWh. The excess electricity from nuclear is more reliable than wind and solar and could perhaps be sold to neighbouring grids at positive pricing.

Although uranium fuel is presently cheap, the initial build is expensive. A major problem is financing nuclear, there are a lot of up front costs and in the present political climate, nuclear projects can be delayed or terminated, driving up borrowing costs or leaving investors in the lurch. Multiple builds of the same reactor type could bring down capital costs and several countries, including India, China and S. Korea build nuclear with much lower costs.

Nuclear power becomes cheaper the longer the plants operate. Typically they have 40 year lifespans but plants nearing the end of this term are often being licensed for 10 year or longer extensions. Closing nuclear plants early is expensive, extending their lives produces very cheap electricity. Even a doubling of uranium costs will increase fuel cost by only a few percent, most of the fuel cost is fabrication of the fuel pellets and rods.

There is a problem with nuclear and it is not safety. Even factoring in Fukushima and Chernobyl, nuclear is the safest way to produce despatchable electricity. The problem is the present reactors do not ramp up and down well to match the changing electrical need. Presently, there are generation IV reactors in various stages of planning that should be able to follow the changing load. At this time the best ways to augment a nuclear grid are hydroelectricity, if enough is available, or natural gas peaking turbines, both of which can quickly vary their output.

Nuclear has other advantages. Enclosed in thick concrete containment buildings, nuclear is relatively impervious to weather and enough fuel can be safely stored on site to provide energy for years even if resupply is interrupted.

With synergistic fears adding climate change to fossil fuels to nuclear, there is no politically correct solution for ‘zero carbon’ electricity. Solar and wind seem so clean and natural to undemanding minds and yet when you pull back the covers they are land and material hogs that desecrate the wilderness more than any logging clearcuts could ever do. Intermittent swings in electrical production make it difficult to control a wind/solar grid and prevent blackouts. Wind and solar and the duplication of resources needed to stabilize the grid are ruinously expensive causing businesses to flee to cheaper shores and creating energy poverty for the increasingly poor left behind. As energy costs increase, excess winter deaths follow, and poor people die.

A nuclear grid would provide ample electricity at a doable price and is scalable to those large increases forecast for electric vehicles and heat pumps. A nuclear grid would save lives, it is a safer way to produce electricity, is more resistant to weather, disaster and unfriendly countries turning off the valves. It is cheap enough to protect the population from energy poverty and future developments could lower prices even more.

And yet nuclear opponents will cling to the near impossible, solar panels in the Sahara, vibrating wind towers, geothermal, waves, tides … All dilute energies that need massive collectors and produce dribbles of electricity for a complex energy hungry world. But there is always another straw to cling to. I know a fellow who advocates those complex articulated anchored buoys that light up a  0.5 W LED as they ride the waves. Just multiply those contraptions by a billion, 400,000 for every kilometer of German coastline, 400 for every meter, and now you are talking real power. Its seems a common belief that there are breakthroughs just one more experiment away …

But what about biomass?

Biomass is what civilization started with, the wood for fires and the deforestation of countries. But like wind and solar, biomass requires large tracts of land and it cannot respond to rapid changes in load to augment intermittent wind and solar. Other than wind and solar, I cannot imagine a more environmentally degrading solution than biomass. Vast tracts of jungle uprooted for palm oil, huge acreages of corn turned to ethanol, and a low energy return on investment (EROI) with returned energy not much more than the energy used to grow the crops. If Germany wants to turn the Schwarzwald to the Nackterwald or pillage the forests of other environmentally despicable countries for wood pellets and pretend that carbon out is balanced by carbon in, it just may fool all of the people all of the time – until it doesn’t.

There is geothermal electricity in Germany with 34 plants already in operation, 25 with temperatures that can provide district heating but no electricity. Efficient electrical production requires large temperature differentials, steam has to have temperatures far above boiling to produce the pressures needed to drive turbines. The other 9 plants together use 302 MW of heat to  produce 42 MW of electricity, an efficiency of only 14%  and only 0.06% of the German load. For comparison, a single 1 GW thermal natural gas plant can operate up to 60% efficiency, producing 600 MW of electricity or 14X more electricity than the 9 geothermal plants.  I’ll ignore geothermal.

Energy is at the very foundation of our economies; as energy prices rise so do the costs of everything else. At this time we are seeing green cloaked assaults on natural gas and nuclear, choices that can actually be both economic and environmental solutions. The neoLuddites keep up a constant blathering that directs us to wind and solar, expensive non-solutions that will be incredibly disruptive and dangerous, causing the implosion of western economies. These malfeasant policies seem determined to destroy our way of life if not our actual lives with the absurd cover story of saving us from a gently warming climate.

Darn that law of the conservation of energy. It means that there will be no magic solutions, no vast amount of energy out for small amounts of energy in … but wait! There is kind of a miracle energy, one low carbon source that can provide the electrical needs of mankind, cleanly, safely, for thousands, perhaps tens of thousands of years and, unlike the fugitive phantom of fusion, it works now. If only we would speak its name.